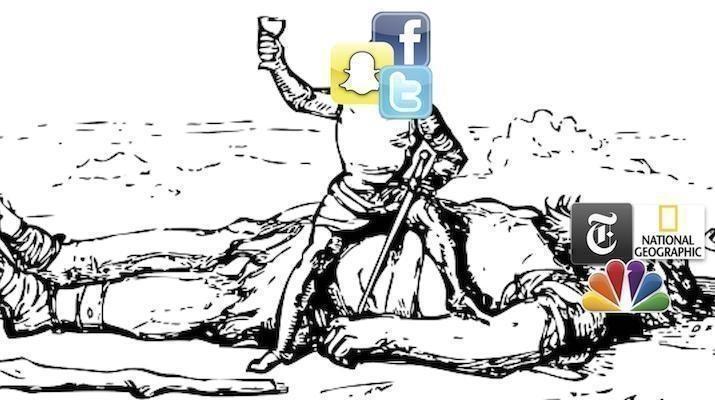 Are tech companies and social platforms to become media giants?

A week full of announcements: Verizon acquires AOL for $4.4 Billion; Facebook partners with 6 publications for launch of their new tool for publishers, called Instant Articles. We are seeing the collaboration of companies from different fields so frequently these days, a sign of a new era for society. Companies rise and fall, but the rise of tech companies and social platforms as leaders of media is quite the feat. The question is, what value do they see in getting involved with older companies who need them more?

AOL is not as relevant as it once was between 1986 and 2001. However, AOL has been trying to develop its video technology and video is the most popular and engaging type of content. AOL also owns publications like the Huffington Post, Tech Crunch, and that's just the tip of the iceberg. By having a vast library of diverse content, platforms, and technologies to choose from, this makes them a great buy for Verizon. Mobile has surpassed desktop as the leading platform for everything, from shopping to searching, sharing to using apps. By acquiring AOL, Verizon has elevated their status to something of a media giant. Combining their strength as a mobile provider with AOL's arsenal of programmatic tools, limitless content, and assets, the possibilities in making the online consumer experience richer are exciting to think about.

To help kick off the launch of Instant Articles, Facebook partnered with The New York Times, National Geographic, BuzzFeed, NBC, The Atlantic, The Guardian, BBC News, Spiegel and Bild. Instant Articles will make it easier for readers to interact with and load articles they want to open faster. The ability for publishers to reach more readers and create interactive articles will be easier as well. This move suggests that Facebook wants to more than dabble in journalism. If anything can save traditional journalism, it's social media. However the partnership between social media juggernaut Facebook is not as one sided as it would seem. Facebook's survival depends on its ability to offer more than just being a platform for chronicling our lives and connecting with people we know.

It would seem social platforms are becoming more than just distractions.

Snapchat has been making some amazing moves into news journalism, advertising (as Facebook has) and even television by developing original series with stars such as Sofia Vergara. Twitter acquired 21 companies in 2014, the most acquired by any social platform. That's something a media company does, that's something a big company does for that matter. Social media might have seemed like a toy to the older generation, but it is clear that social media is a force to be reckoned with. They are investing in new companies, they are investing in old companies. They see the value in both the traditional and new. The same goes for tech and telecommunication companies like Verizon, Sprint, and IBM.

To survive and stay relevant companies need to have their pulse on what people want and will want. They also have to acquire more talent and tools that will enable them to evolve.

Here's a statistic that'll impress you. Did you know that 89% of the Fortune 500 companies from 1955 are gone? Can we tell which companies today will still be here in another 60 years? Hard to say.This is one of the most volatile but exciting times for all companies. Can you imagine Facebook not being around in 20 years? Anything is possible.