The new HTTP2 protocol allows for much faster data transmission which results in a performance boost for websites.  We used our own website to see if this holds true and if we could bring this new technology to our customers. We investigated primarily page load performance with SEO as a secondary benchmark.

HTTP2 is the next upgrade in the HTTP protocol. Since around 1999, we have been sitting at HTTP 1.1, and with this new protocol, we could see a boost in performance which in turn would allow for a better user experience and an improvement in SEO.

We used our own website geoffresh.com's homepage to conduct these tests. The first test was a standard benchmark against HTTP1.1 performance. The following tests were with HTTP2 enabled. The tests were completed using four different trial methods: Pingdom (USA performance) , GT Metrix (Global Performance), Desktop with a human watching and counting, and Mobile with a human watching and counting.

All time is measured in seconds. The Pingdom and GT Metrix Averages are the average of 8 trials. Requests are the number of items the server is requesting. The page size is measured in MB (mega bytes) and the percent difference is always measured against the base of the HTTP 1.1 test. Visual and Mobile tests were a human counting approximately how many seconds it took for the page to render on a desktop (Visual) and an iPhone not connected to a WiFi network (Mobile). GT Metrix tests from various locations around the world, while Pingdom tests from various locations inside the USA where our server is located. 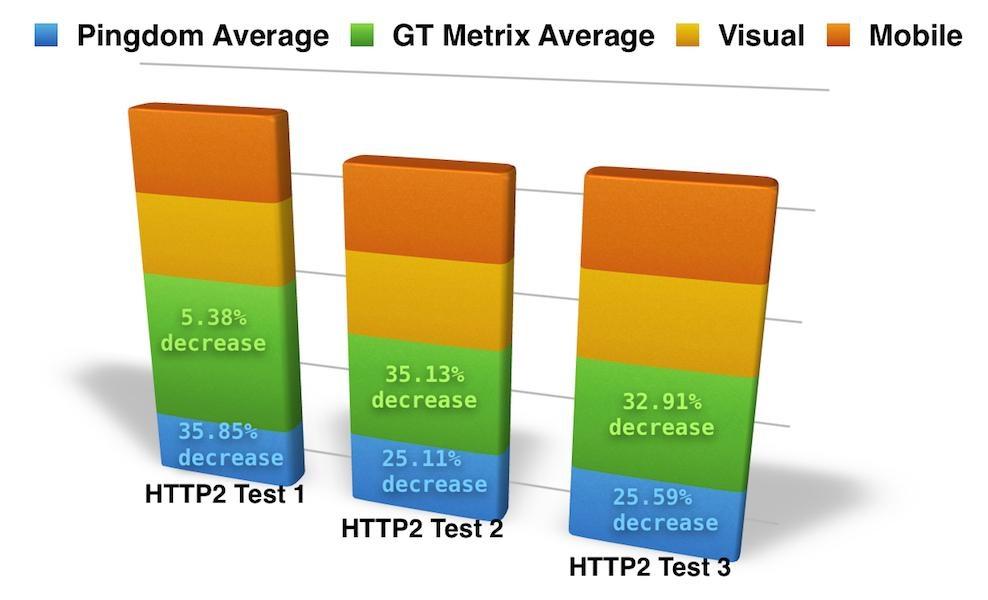 Between HTTP2 Test 1 and 2, there is a slight difference in the averages. This can be accounted for in the individual trials as there most likely was an increase in network traffic for Pingdom and a decrease for GT Metrix. The first test was completed in the afternoon while the second was completed in the early morning hours.

The third test has an increase in requests and a very slight decrease in performance. It was noticed that the deferral of javascripts that we were using caused an issue with the site analytics. When we stopped deferring the javascript, we noticed that more javascript was loaded and analytics returned to normal under HTTP2.

With the change from HTTP1.1 to HTTP2, we noticed a massive difference of a 92% decrease in the Time To First Byte (TTFB). This is the amount of time that a server takes from the getting the request for data, to the first byte of data to be sent and received by the requesting computer. Having a lower value means that the data is delayed less - meaning faster connection times to the server to start getting the data to render the page.

While completing this test, GT Metrix would also use Google's Page Speed scoring and Yahoo/ Bing's YSlow score. At the end of this test, the Page Speed score was 90% and the YSlow score was at 82%. These numbers could go higher at 95% for pagespeed and 83% for YSlow if we enabled deferral of javascript, but the trade off would be losing accurate analytics for the website.

It was very important that the tests at the end had page load times less than 3 seconds total. This is the threshold that the search engines use to start penalties on slow websites and start sending their pages down the search results.

For the Organic search results, we had compared the 22 days we had this running to the 22 days previous and noticed since starting the test a 99.67% increase in new sessions, 70% new users, a decrease of 23.41 % of bounce rate, and a 75.99% increase in pages per session. One of the most important parts was our conversion rate increase by 400%.

We also noticed a slight improvement in our rankings. On the monitored keyphrases that we are optimizing for, we saw on average a 1 position increase in overall position at the time of this writing.

HTTP2 has shown that it gives a great improvement to site speed, resulting in better user satisfaction with a website. In addition this can improve the conversion rate of a website as for every 1 second it takes for a page to load, that can cause a loss of 7% of conversions. This is due to the frustration of users not willing to wait for slow webpages.

Your visitors want a fast website. If you want to improve your visitor's online experience, contact us today for a quote on our Data Driven SEO Web Design.