Social media reporting is something we are all doing unconsciously. We all have the potential to be a journalist now that technology has evened the playing field between reader and reporter. Originally I wanted to be a journalist. I was editor of my high school newspaper, an editor and writer in college, but then I found what I'm passionate about now. Marketing and advertising employee facets of journalism in their campaigns, you could say journalism is a cousin to marketing and advertising. I'm used to doing spur of the moment social media work because of my background, but for those who are new to it,  here are my fail safe tips for good social media reporting:

Don't sacrifice quality for speed. You'll most likely be representing a brand, celebrity, or an entity other than yourself online, so make sure that what you share adds value to the image of the brand. Share above average moments from the event. Don't feel like you have to be sharing 50+ photos and videos. You want to make your perspective of the event memorable, so choose carefully before clicking share/upload.

2. Make Updates Feel Up To the Minute

Be as fast as you can capturing and sharing video and photos. It's an exhilarating feeling for both the online audience and you the social media reporter. Why would it take 6 hours or even 20 hours to have content uploaded? There's value in suspense, but don't lose your chance at getting exposure during the event either. Not to worry if you can't upload a short 10-30 second video in less than a minute. Remember, quality, memorable content is the most important objective.

Know the hashtag(s) being used for the event, so your content is easy to find and informs the audience of how to follow along. Even if you're just tweeting out information, make it as short and informative as possible. Clarity is next to godliness after all. That doesn't mean losing personality. Consider the headline styles from the old newspaper days of the 1930-40's that felt action packed, and let that spirit influence the words you choose. You'll make what photo or video your sharing jump out at viewers even more.

4. Get Lost in the Moment

Be a part of the crowd, get a sense of where the center of the event is and where you need to be to capture the unexpected. You never know who you will meet, so don't be shy to ask questions and chat with people. You might learn something that will help you better capture the event from the audience's perspective. For those who can't be there, they will appreciate your work if it makes them feel like they were there. You do that by being in the moment.

5. Don't Keep Your Head Down Too Long

When I looked at the photos and videos that were taken from the event I attended yesterday, my head was down in almost all of them. Timing is everything in most cases, so you might find yourself in the middle of writing a pithy tweet as a photographer flashes his camera bulb. Just remember to not be too glued to your phone or equipment. A part of being in the moment is enjoying the even at hand. So remember to keep your head up when you can.

The reason I wrote this was because an opportunity arose where I got to do some social media reporting close to home. Eric & Kathy is one of the most popular radio shows in the Chicagoland area, on 101.9FM (The Mix). Eric & Kathy came up with a March Madness bracket in which Chicagoland Suburbs competed. The winning suburb was announced on Monday, and happens to be next door to the town in which my husband and I live. Hearing that there was a presentation of the trophy happening this week on Wednesday, my eyes lit up. I thought it would be a great opportunity to be a part of something fun and local, and a great way to show how much the small business my husband and I run loves to support local communities.

It was really interesting listening to the radio show on my way to the event, which was held at Orland Park Civic Center. Eric and Kathy were not going to be there, but their traffic reporter Melissa and social media manager Chris were going to be there. As I was driving I'm hearing Melissa on the phone with Eric and Kathy saying how they'll be getting to the Civic Center soon, and I'm thinking "oh my gosh! I'm the road too!" Silly I know, but it was cool too. A part of being human is community, and events are great opportunities for participating in something bigger than yourself.

In the end, social media reporting is like archaeology, you are chronicling a moment in time as it happens that will tell the story of that civilization. It's a far more important job than we realize. Years from now we'll look what was shared on social media and it will inform how we see what it means to be human and how to live fuller lives. Our social media footprints will also inform how we cover events in the future, so that they are as compelling and memorable as possible. 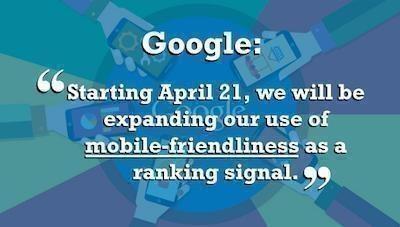 Google will be upping the requirements for a well designed website, effecting site ranking in search results.

The 20th century concept of selling to consumers is long gone...

"replaced by inspiring and guiding people along their decision journey. Smart brands have found the most effective way of guiding people is to engage their emotions and imagination and – where possible –encourage them to share and participate."