Is it always appropriate to engage in memorializing a dead celebrity as a brand or business entity?

When it comes to engaging in popular topics as a brand or business entity, you must tread carefully. 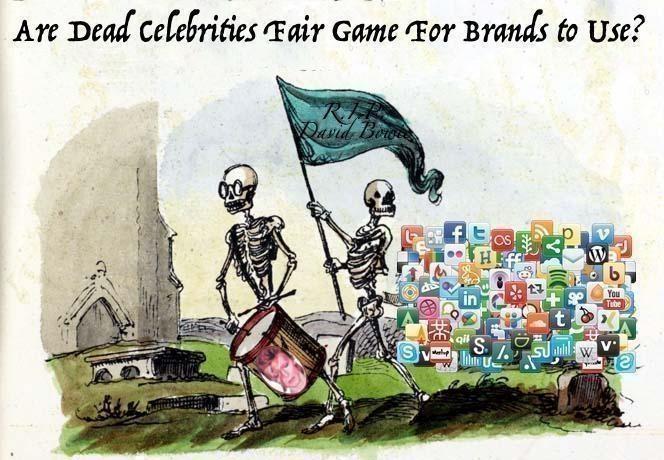 The death of a well-known person or celebrity death doesn't usually relate to a product or service, unless the deceased person was a spokesperson or in some way involved in your brand or business at one time. Or perhaps your business is about dead celebrities. Either way, it is unlikely that it will do much of anything for you except bring you some more exposure and engagement on social media for that short period of time when the death of the celebrity is fresh in the public's mind.

There's a fine line between paying respects and being opportunistic.

January 11th, 2016 was the beginning of a frenzy of memorials on social media. Not one, but several well-known people passed away in that single week. David Bowie, Alan Rickman (both of whom were eerily the same age of 69 when they passed),  and more received tributes, retweets, video compilations, collages, and more. The memorializing frenzy began the morning of January 11th. Within 4 hours of the announcement of David Bowie's death Twitter saw over 2.3 million tweets memorializing Bowie.

Social media is one way to build relationships and attract new customers to your business or brand.

The conversations you choose to engage in on social media can hurt or help your brand or business entity's image and reputation quickly. It seems harmless to post a photo and pay a tribute to the well-known person who passed away, but some brands don't understand limits or what is inappropriate.

Do you really want to be seen as a brand leading a sort of funeral processional on social media or one trying to profit off people's grief by sticking your product in a tribute?

The only thing funnier than Crocs tweeting David Bowie remembrances is how they deleted it 20 minutes later https://t.co/PIzhU9nVdr

A brand has to know how it defines itself, how it wants others to define it.

No this isn't becoming one of those posts on the psychology of colors in brands, but it is timely that it should be 'Blue Monday' today. A bit mythic and pseudoscientific, the origins of this day are in a press release. Blue Monday is based on an equation created by Dr. Arnall Cardiff for Sky Travel company in 2005.

The content you distribute can either make your company look foolish, offensive, or brilliant. The worst part is that its hard for people to forget what you posted when "people can copy or download it, change and remediate it, even upload and repurpose it” (Thomas McMullan, Alphr).

Social media is changing the way we think about death and how we talk about it. It's alright for people to share about their favorite rock star or actor, but a company has to think before it shares.

“There can be great difference in what is seen as the right, genuine and respectful way to mourn, in comparison to what others consider to be transgressive. New media [and] digital technologies are just entering into these conversations.” - Dr. Selina Elis-Gray (researcher)

What do you stand to lose for posting about the passing of Dan Haggerty? Not much, but what if your company is straight-laced, will it seem out of place to post a #RIP for an actor whose famous for playing a mountain man? David Bowie might be too controversial for a conservative brand to post about. Sometimes trying to be popular can alienate your specific audience. Some brands, like Coca-Cola for example, didn't post anything related to the deaths reported the week of January 11th. On the other side of the spectrum we have a company like Time Warner Cable posting about how their on-demand music channel called Music Choice is playing David Bowie music on January 12th as a special tribute.

.@MusicChoice is paying tribute to the legendary David Bowie w/a playlist On Demand. Check it out  #RIPDavidBowie pic.twitter.com/KAQLGQ80Gy

Getting caught for monetizing off a dead celebrity makes you fair game for a lawsuit.

There's paying homage to a dead celebrity in the hopes of getting more visits to your website or to get exposure to potential customers free and easy, and then there is blatantly profiting. As shared above, Crocs posted a self-serving tweet that was attacked so strongly by fans for its insertion of one of its shoe products that their post was taken down within 20 minutes. Publications have received

"20 articles written by battery hens with journalism degrees all posted before lunch, each discussing in 200 words or less a separate minutia of a person’s life in order to multiply advertising profits? That’s grim." - Tom Mendelsohn (NewStatesMan)

Being dead doesn't make you fair game to use. The estate executors of legendary celebrities like Elvis and Marilyn Monroe will protect the use of their name, image, likeness, or material. Dead celebrities is a big business and executors don't take wrongful exploitation of their loved ones lightly. Most brands or business entities are cautious and aren't looking to commit copyright infringement. However posting a tribute about a dead celebrity isn't a totally innocent action.

He inspired me by his creativity, extravagance, allure, elegance, androgyny and sense of fashion. @DavidBowieReal pic.twitter.com/i0DQ1Kye8X

When you post something you know is a 'hot topic' chances are good that you are looking to catch some eyes by using that hashtag of the moment. What you post says more about you to people than you realize. Sometimes, it makes you look better by not engaging in every topic of conversation on social media. It shows you know your brand.

Essay on Modern Medical Education, No. 1
The Alarm, or the Kirk Yard in Danger
From Vol. 1, no. 6: Northern Looking Glass
18th August 1825