Inauguration day is symbolically the transfer of power from one president to the next, but there's another transfer that takes place that day too: a transfer of social media.

Hi everybody! Back to the original handle. Is this thing still on? Michelle and I are off on a quick vacation, then we’ll get back to work.

The means by which the President of the United States communicates and interacts with the public is more instant than in any time in history thus far, thanks to internet technology. And each President brings his own personality to the social media account of @POTUS et al. Did you know that the first transfer of the U.S. Presidential Twitter handle happened on January 20, 2009? That was the day Barack Obama assumed control over George W. Bush's Twitter account and the @POTUS (a.k.a. President of The United States) handle was born.

Evidently Presidents will have to change handles and archive their #socialmedia accounts when they leave office. https://t.co/0tRbiAKr8A pic.twitter.com/MJlZZoZyf9

Since Facebook and Twitter popped up in 2006 and 2007 respectively, social media account management was added to the list of assets, channels and procedures for entering, executing, and exiting the office of President of the United States. Twitter played an especially influential role for President Trump in contrast to the other social networks, which is why I'm focusing more on that social network instead of the others. Also, the handle was made famous with Twitter before Instagram, Snapchat, and the other social networks adopted it. With Facebook, there can be a million John Smiths, but on Twitter if your name is taken as a handle you have to settle for whatever you can get. 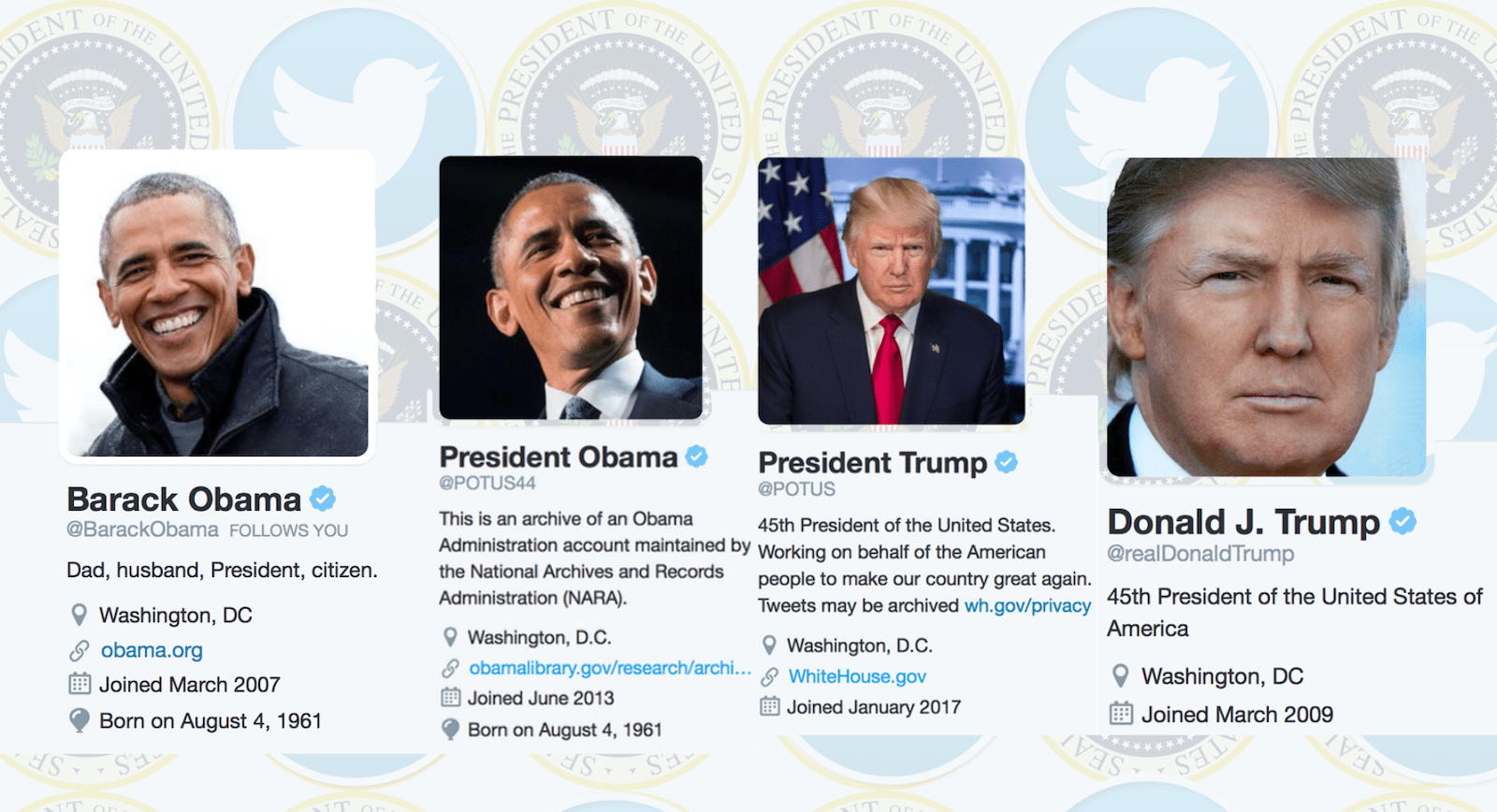 The switch between President Obama and Trump seemed to have happened overnight. As an active Twitter user I uncharacteristically didn't think about what would happen to Barack Obama's Twitter handle until the day the transfer of the @POTUS Twitter handle, Inauguration Day 2009. President Obama retains his followers and changed his Twitter handle from @POTUS to @POTUS44 so that President Trump could assume the @POTUS handle. It could be a security measure given that providing login information would be involved in a total Twitter account takeover. Depending on whether the outgoing President was a regular social media user before entering office also plays a role. Either way, it's just easier to change Twitter handles.

Even when a president leaves office they must be cautious and continue to manage their image and reputation as a public figure. A once active President doesn't have to use social media after he's left office, but they should still have a PR or communications advisor at hand. Making sure the message you want comes across the way you want is the key of a politician's career after all. Bill Clinton and George H.W. Bush have active Twitter accounts; Jimmy Carter and George W. Bush have less hands-on Twitter accounts with handles named after their Library and Center.

As time goes on it will be interesting to see how tweets become a part of how history is written. As print, radio, and video were methods of archiving what our Presidents said, thought, and did, so too shall social posts and tweets I think. Do the Twitter and other social accounts of our deceased Presidents become like monuments, a place to look back at  their legacy? Crazy to think that we'll have moved from stone to screen in preserving our Presidents. I would love to see the look on the faces of the past U.S. Presidents if they could see how the mode of Presidential communication has changed.