Is Social Media A Waste of Money? 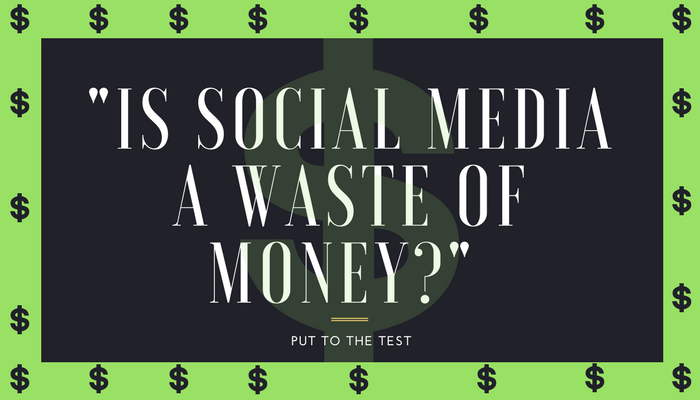 This past summer we almost lost the love of our life, our puppy Sammie.

You can read about how she came to be missing and how she came back to us like the Brave Little Toaster or Lassie. The point of this article is to examine the ROI of social media using a real life example, namely the social media ad campaign we ran during those 18 hours that we were looking for Sammie.

One of the first things we did when she went missing was create an attention-getting graphic that we could share on Facebook groups and repurpose as advertising content. The messaging was not hard to come up with because the nature of what we were communicating was very simple and to-the-point.

We first shared about Sammie's being gone missing on four of the largest and popular Facebook groups for Tinley Park.

Then we set up a single ad to run on Facebook, Instagram and Twitter. We put $50 towards each social network to deliver that ad to audiences on a daily basis. The reason that we started off with a very conservative daily budget at the beginning is because we were hopeful that we would find Sammie within 24 hours, we set our audience target to be very specific (Tinley Park residents) and were not able to monitor the campaigns closely.

Results of the Ad Campaign

In the end we only needed to spend $72.38 for 18 hours of advertising on all three social networks. The social network that cost the most to advertise on was Twitter. 77% of the ad budget went towards Twitter. One reason is because Facebook has to approve your ads and can be slow to approve. The Twitter ad ran consistently for the full 18 hours whereas Facebook had two hiccups due to the graphic having "too much text" and the second hiccup happened because we wanted to add some more filters to the targeting parameters of the campaign.

All three social ad campaigns were set to an objective of awareness. So the KPIs for that type of campaign were CPM (cost per 1,000 impressions) and number of users reached were the most relevant, but the number of times the ads we also took into account. The social network that performed the best in terms of reach and shares was Twitter (9,079 users reached, 21 retweets), but Facebook won in terms of CPM ($3.42).

Combined, the ad campaigns helped us reach 13,766 more people and earned 21 more shares which means that we potentially reached even more people, local or not. What we found more effective were our organic efforts.

For 10 hours we took four shifts of looking for Sammie in and around Tinley Park. We found that word spread fast by being outside, talking to people and putting up flyers in popular locations like Starbucks. We met many people and they spread the word in ways that proved more effective than an ad could persuade.

We reached out to several media outlets and the only ones who shared about Sammie missing were the Tinley Junction and The Tinley Park Patch. Although the organic social only reached 4,104 or more people, a fraction of how many were reached through the ads, but the potential reach was incredible.

Combined all the social posts that were put out on all three social networks, including those made by the Tinley Junction and the Tinley Park Patch earned 163 shares. That's still disheartening that only 3.9% of those reached shared about this story with their followers, considering a life was at risk, but through the lens of marketing, organic outreach outperformed paid for word-of-mouth spread.

Social is only a waste of money if you're not putting thought into how you're crafting content, who your audience is and where your audience is. From our experience we found organic to be the strongest vehicle for creating buzz and lift for our message. It was the getting offline and getting outside that drove people to share what we posted on the Facebook groups even more.

The rule of thumb for businesses is to use a combination of paid and organic social strategies and tactics work well to create buzz around a message. When it comes to a lost dog or something more personal, go for relevant social communities and creating connections with people in those communities.